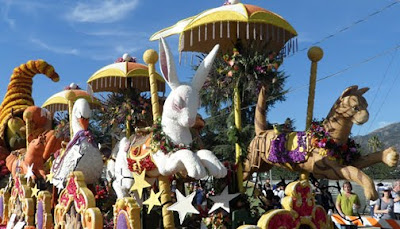 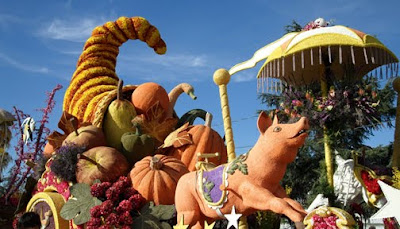 This was one of three floats I liked
(Kaiser Permanente's "Magnificent Tales of Health").
This weekend my husband and I went to see the Rose Bowl Floats. The best thing is that after you go once you actually never have to go again because you can say - "I already went once." The bad things include you have to go on a shuttle to the "viewing" and shuttles never forebode a good time - unless it is the LA Open, it's hot like the devil with no shade, and there are a million people - a lot of them in strollers, and lastly without the context of the parade, the floats are generally disappointing results of design by committee. It starts with the basic concept being weak and the sculpts making it worser. I don't like to use the word worser often but it is really appropriate here. Not to say there weren't some good floats - and quite a few decent ones - but there are some ones that make you wonder how there was any possible way to ever get consensus on something so awfully conceived. Well, I guess if you think about the DMV it's really not so hard to believe.

What's neat though, is when you get up close - you can see the amount of work that goes into making the floats although there is always irony is using flowers to create a larger, fake looking flower. 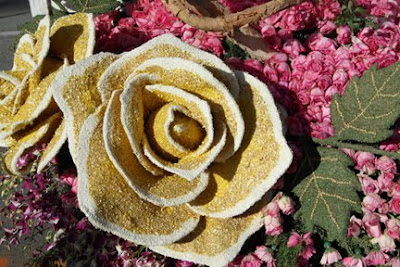 You can only see the floats for two days and as you can see
by the poor wilted roses here, there's a reason for that. 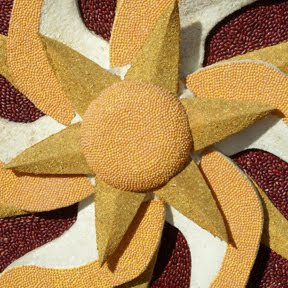 You do have to take your hat off to the level of detail
on the floats and the personal sacrifice people made
to achieve it. Who ever glued all these seeds down will
probably never be able to look at bean soup
the same way ever again. 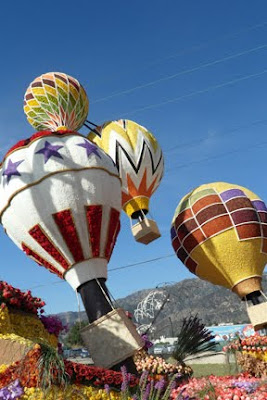 This float (not one of my favorites but a nice float
which photographed nicely) won an award.
One of my objections I would raise if I were the Queen Witch of the Rose Parade is to only give meritorious floats awards. At the viewing, it seemed that almost every float except the very most heinous ones won an award - except one heinous one did win an award. Plus it also seemed like a float could only get ONE award. I think this is because otherwise there are not enough awards to go around. But this just doesn't seem right to me. It's clearly not in the spirit of Capitalism and just so un-American. 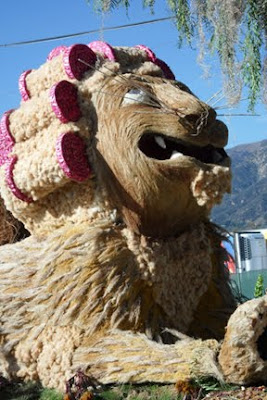 Here is a detail of the Cal Poly float that depicted a lot of jungle animals getting their hair done in a salon that was run by monkeys. It was cleverly named "Jungle Cuts." It won the Bob Hope Humor Award. We thought it was really funny - we laughed and laughed and laughed. Honestly, we thought we would never stop laughing, because it was so humorous. 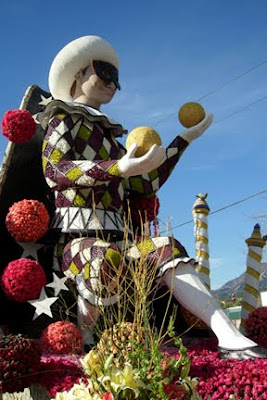 Do we really need another float with a man with balls? 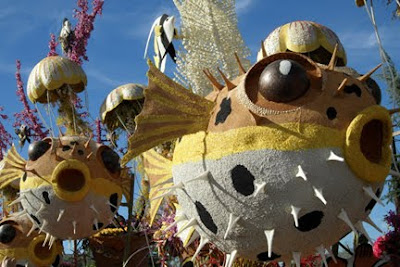 This was my favorite float by the Downey Rose Float Association called "Jewels of the Pacific". It was featured in the LA Times and is what made me want to see the floats. I thought this float was really creative. I especially liked the jellyfish - but I am always partial to jellyfish. I am even known to eat jelly fish when it is sliced thinly with some sesame oil but that is another post. The effect of this float was somewhat diminished as I overheard a gay couple getting a snapshot say afterwards - "Well we had to, they were BLOW fish after all." 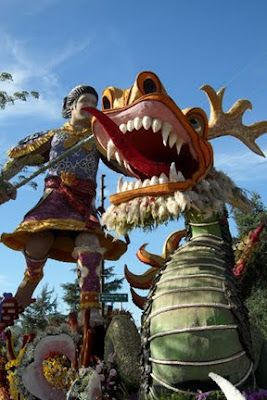 This was my husband's favorite float by China Airlines called
"Taiwans Gardian - the Third Prince" (spelling courtesy of
the Chinese). He liked it because of the use of scale and movement
to create drama and majesty. 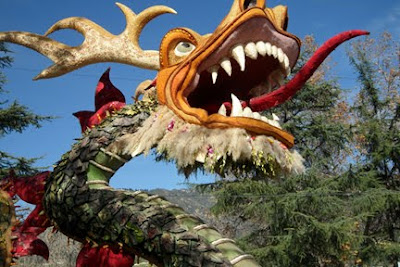 He also liked how leaves were used to create the
scales of the dragon and how they created depth. 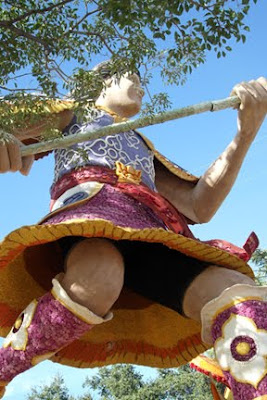 I personally liked the wisdom in putting bicycle shorts
underneath the warrior although was somewhat disappointed
that the warrior was not anatomically correct.

Another Year Another Resolution 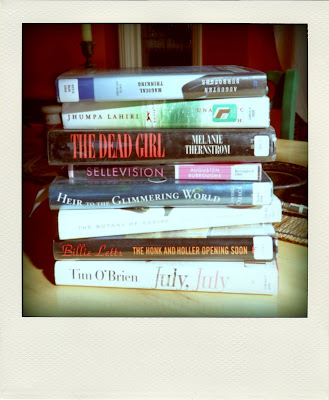 I am a firm believer in not making any New Year's Resolutions - except ones that I know I will keep. I mean, there are so many things I procrastinate about now - so why add one more thing to the list to end up feeling badly about not doing? That is what is behind this year's resolution. A Library Card.

Why a Library card you ask?

1. I am not a big TV watcher, in fact, I think I may actually one of the very few people in North America that can almost qualify as not watching TV "at all." This is mostly because it is too difficult to watch TV at our home. To start, we have about a thousand clickers. OK. There are not a thousand but there are at least three I am aware of. Each of them has dozens of buttons - and my understanding of their functionality is limited. They are all tiny buttons and they just don't make sense to me. I just want to turn the TV on, and change the channel and volume. Honestly, is this too much to ask? When on occasion I have actually been able to turn the TV on - the only show I want to watch - COPS (the greatest show ever made) is shockingly not always on. Hence I read.

2. Economic Reasons. I read about 2 - 3 books a week. This gets expensive, even if you, like me purchase your books used through Amazon or my favorite used bookstore, the Brand Bookshop and resell them or go to the Goodwill near my home where some book club dumps their books. I've gotten some real goodies here - including the Guernsey Potato Peel Society when it was still on the NYTimes best seller list.

3. I miss the library. When I was a kid we used to go there all the time and peruse all these great books. It's where I found Corduroy, Where the Wild Things Are and Snow White and Rose Red. Back in the day, there was a little pocket in the back of the book where they kept a sign out card that the librarian ran it through a machine at the end - which was very satisfying. Plus as kids we got to sit a this hexagonal table and each slice of the table had a little cubbie so your could stash a ton of books so the other kids with couldn't get their grimy paws on them while you were there - and no one said anything.

4. Monrovia, the town I live in, just got a new and quite handsome library, the aptly named Monrovia Public Library.

5. Library Card - that would be an easy resolution, right?

Being the doofus I am, it took me two tries to get my card. The first time, I browsed, got all my books and went to get my card at ten to closing. An aide was about to make my card until another librarian - one of those mean, pinched women who hates other women (or maybe they just hate everyone) said it takes at least 15 sometimes 30 minutes to make a card and therefore I would have to come another day. The next day was Sunday and they're closed Sundays. Isn't that weird? Shouldn't a library be open on Sundays and keep people out of mischief- especially after painting the town red Saturday night? I would think a library would be a good place to nurse a hangover, nice and quiet.

I found success the next day, Monday. This actually worked out for the best because the entire staff was happy and helpful and pinched face lady was nowhere around. After getting my books, I got my card in less than 2 minutes. Yes, they just copied my driver's license and printed it out - it may have actually taken less than 2 minutes. I wanted to say something about the mean lady but I refrained myself as it is a library and I was afraid if I did say something she would somehow appear and take my new, hard-earned, library card away from me.

Here is what I got:

Magical Thinking, Augusten Burroughs - This great. Clever, funny and yet somewhat disturbing - a mix that is very much a Burroughs signature - although in one of the true stories he kills a rat which I think is cruel. Of course, I feel homicidal toward the raccoon that killed my duck Walter even though he was an ungrateful duck, 4 of my doves and recently the goldfish in my pond.

Sellevision, Augusten Burroughs - (not yet read- and when I finish this and You Better Not Cry comes back into the Library, I will be very sad because I will have read everything Mr Burroughs has written. That is of course if he doesn't write something in the meantime and publish it immediately for my convenience in which case, I will be happy again.)

The Dead Girl, Melanie Thernstrom - I started this but I might not finish it. I read about it in the New Yorker as being "as good" as Truman Capote's In Cold Blood.

The Honk and Holler Opening Soon, Billie Letts - Letts is the author of Home is Where the Heart Is - where the mousy, overweight and pregnant protagonist was immortalized on film by Nathalie Portman - who to me is the epitome of mousy and overweight. Can you think of anyone mousier than Nathalie Portman? I certainly can't. It's just another perfect literary casting by Hollywood.

July, July by Tim O'Brien- I just finished The Things they Carried. I wanted Going after Cacciato but that wasn't in.

Heir to the Glimmering World Cynthia Ozick - because a friend Bethany has it - and I have to do everything she does.

Unaccustomed Earth, Jhumpa Lahiri - which after bringing it home I realized I read it already. These short stories are just so good you feel sad when you're done because there is no more to read.

The Botany of Desire, Michael Pollan. I think his last name should be Pollen but that's just me. I am pretty excited about this one.

I am happy to report that I not only did I accomplish my one New Year's Resolution and I also got that same feeling about hitting the motherlode when I walked out with my stack of books. Now the hard part - not dropping any of the books into water when I am reading in the bathtub.
Posted by Lynn Chang at 4:29 PM 1 comment: