Do You Want to Touch My Monkey? 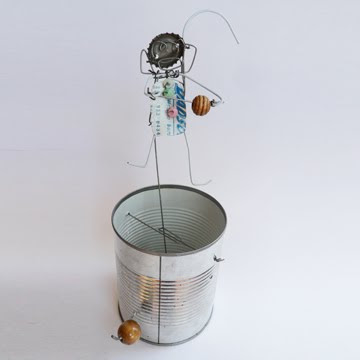 This past week I was finally able to go see the Aaron Kramer exhibition at CAFAM (Craft and Folk Art Museum). I was particularly intrigued by his motto: "Trash is the failure of the Imagination" as I come from a proud family of garbage collectors. Although eventually we did move up to garage sales as my immigrant parents achieved the American dream, old habits die hard. I still can't help want to paw through my neighbor's trash on garbage day for the kind of "good stuff" only a garbage afficionado can ascertain and then storing it in my my garage, turning my garage into a fire hazard and then becoming the neighborhood pariah who is bringing the home values down when your garage is so full with junk things start spilling onto your lawn--just like my dad did. Isn't heritage a wonderful thing?

The exhibit did not disappoint. Everything was so delightfully creative and whimsical plus we had the bonus of all the Food Trucks parked outside, although the Sprinkles Van drove off early despite people pounding on the sides as it was departing. No matter, the point was the show even though I busted a nail on the van. Anyway, after going through the show, I found they had a Kinetics Kreation class taught by the artist himself! I was somewhat hesitant because they used alliteration and spelled Creation wrong (which has been a pet peeve ever since I worked in the Toy Industry and this was the methodology of naming almost every toy). However, I couldn't turn away from an opportunity to make something cool out of garbage. So I decided to take a chance, $40, a coat hanger and a old can to CAFAM this past Sunday. 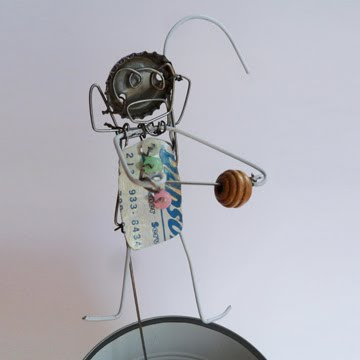 Notice all the subversive details like the hat and the buttons.

You may wonder who goes to a class like this. The answer is not pretty. Kids of course, and then a bunch of "crafty" femme d'un certain d'age like myself - the latter being not so nice. Lots of creative haircuts and earth mother outfits (anything to detract from the fact our faces are beginning to drag on the ground) and a lot of talk about things like master beading and joining a craft circle. You know, the things that don't matter to you when you are young and cute. They only matter when you get older and it's the only thing that's remotely positive that defines you.

Once we were settled in, and the master beaders had identified themselves, Aaron went through how to make our Kinetic Creation and we got a simplified review on bearings, cranks and fulcrums. We were then set loose. Our class was very noisy and chattery because of all the women. So noisy I wonder if Aaron questioned the wisdom of having so many women in a class or if he is ever going to do it again. Anyway - we all started making stuff and doing the blow by blow of what we are making. Why it is important to have a narrative when you're making something I don't know, but it does make it more satisfying somehow, even if no one is listening. There were many cool things. Birds were popular, but there were some flowers, a running man, a cat head, a boat, a dancing girl with cornrows and a few very cool abstract thingys. I initially wanted to make a retro robot but I lost patience and decided to make a subversive monkey. When you turn the crank he moves back and forth and up and down.

All in all - a very, very fun class I would highly recommend. I am already saving tin cans for my next Kinetic Kreation. 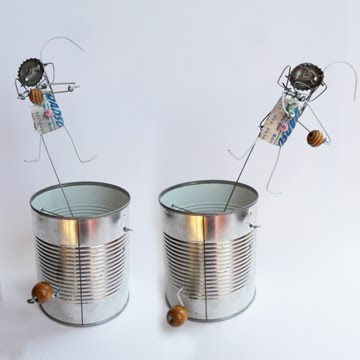 Whooaaaa! It moves back and forth!
Posted by Lynn Chang at 11:10 PM