From our balcony in the morning. The window you see
on the left hand side is where I sit typing.

This is what we woke up to. The fire is obviously far away but it's still really disturbing. It looked like a volcano erupting and more so as the day went on.

This is a close up of the house on the top of the hill. You can partially see the "M", which stands for...Monrovia. On Monrovia High School foot ball games, it gets all lit up. Interestingly, the lady of the house is also a crazy cat lady. A few years ago, she left us a note complimenting us on Fox's grail design and asked for our contractor - promising not to use our design. But we told her we would be flattered if she used it...and she did! Flattery does get you everywhere.

Here is a view behind our house later in the day. As you can see, it is garbage day! Everything north of our street was used as the arbitrary dividing line between possible evacuation or not. (Wendy - Google Earth actually has the wrong house for us.)

Later in the day you can see the cloud gets more billowy as it blows out. This is picture going up our street.
Around 4pm when I took the picture above, we got another reverse 911 telling us that the smoke we were seeing were from the backfires. I am sure the fire department got inundated with stressed out Monrovians all day.

I can't imagine how the people whose houses were close to or actually burned down. When you think about it, houses really are complete tinderboxes. It makes me want to throw out every piece of paper I have.

At this point the fire is about 25% contained - so it's no longer the nightmarish angry force it once was. Sadly I think, in about 2 weeks, despite the havoc it wreaked, most people who aren't impacted or inconvenienced by the fire will move on to something else. Since it's Los Angeles, it will probably be something really, really important.

Another apocalyptic view of the fire east of where we live. 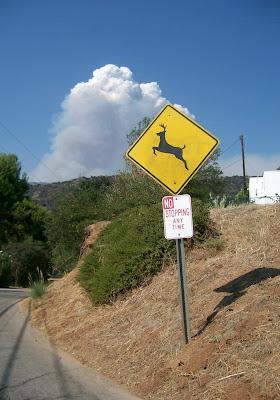 This is my favorite picture I took today.