What's shocking about the fire, is the sheer magnitude. You can drive along the freeway for 30 minutes and there is constantly fire outside your window. Apparently, this is the worst recorded fire in California since 1895. 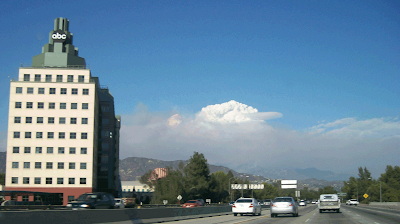 Here is a view from the ABC/Disney building (by Michael Graves). Doesn't the cloud in the center look like it's sticking out it's tongue at you?

There are all sorts of hot spots created from the fire. It seems when one gets under control, the another one appears. This one was just billowing and pumping huge plumes of smoke.

As the sun set you could see this eerie red glow from behind the mountain ranges and when it got darker, you would see these huge flare ups. Flare ups that were easily as tall as 3 - 4 telephone poles. What would happen is that the fire would rage into a valley - and since a fire is all about consumption - it would just devour all the fuel - brush/trees and all the oxygen supplied by the Chimney effect. Until you see it, it is unbelievable how quickly a fire can completely overtake and destroy an entire valley. It is just so fast. It's "whoosh" and then the fire moves on.

It is so hot here. I can't imagine what it is like for the firefighters.
Posted by Lynn Chang at 12:14 PM