It may surprise you that there might be ongoing drama with an avian that has a brain the size of a chickpea - but yet, there is ongoing drama.

Although the final wiring of the cage and the removal of the ladder had gone smoothly, when I went to transfer the doves, one of the doves flew away. Far away. All the way to the top of our shedding pepper tree.

On one hand there was something poetic about the dove busting his dove joint and leaving us with an even number of doves. However, on the other hand, if you were the one to clean up the dove William our cat eviscerated, you would realize that freedom comes with a harsh price in these parts: cats, hawks, raccoons, foxes and the occasional owl to name a few. There really was nothing I could do though and I didn't give the dove much of a chance in surviving the night and hoped he enjoyed his short-lived freedom.

I was therefore shocked when late afternoon the next day he was back. He was keeping bad company with some wild doves and they had formed an impromptu gang of three. They flew around the dove cage cooing and mocking the caged birds and then left as dusk fell to do whatever bad doves do at night. 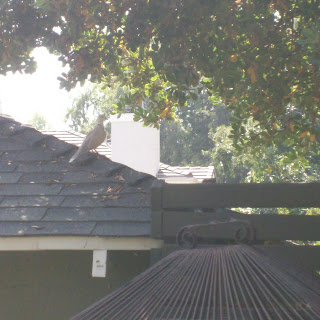 The next day, lo and behold, he returned but without the doves from the day before. I guess three's a crowd even with doves. He sat on our neighbor's garage roof and I was able to get a fuzzy picture of him. It's hard to say as I couldn't get that close to him, and his head is small, but honestly he looked like he had a retrospective look on his dove face. I put the old cage next to the new cage with the door open and food inside but he wasn't falling for that one.

On day three, he decided he wanted back in the new digs, in the worst way. He kept trying to "fly" into the cage. After many futile attempts, he sat on the old, bird cage but showed no interest in going inside. Worried he was hungry and weak, my husband Fox, not to confused with the grey foxes in the neighborhood, scattered some dove seed on the ground and acted as a personal bodyguard as he ate. He let us get within a foot of him but our attempts to catch him were futile.

On day four, the humans had a plan. We took three doves from the new cage and put them back in the old cage. We then put the old cage back into the guest-house, where they have been spending the night for the last year and left the guest-house doors open. To make this even more tempting, we put a dish of dove seed next to the cage. Then, the trap set, we went to see GI Joe. (The movie is only OK. District 9 is far superior.) At any rate, when we returned, he was sitting on the food dish in the guest-house. We tiptoed up and closed the doors on him. Then, with him trapped in the guest house, I went into the room and easily caught him, and transferred all the doves into the new cage. 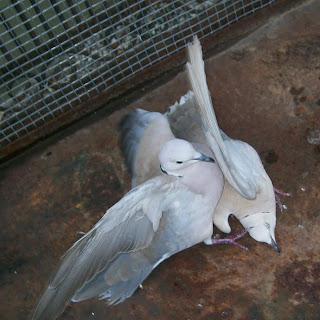 Homecoming was bittersweet. The minute the birds were all in the cage, our tyrant dove, GK (Genghis Khan) proceeded to beat the crap out of poor Henri Charriere. This was done in Martial Dove Art Style, which consists of pecking, making a strange hoo sound and beating your opponent with your wings. Henri in his weakened state was no match for GK so thankfully GK was able to quickly re-established his sole right to the top of the hanging swing and peace in the dove condo was restored. 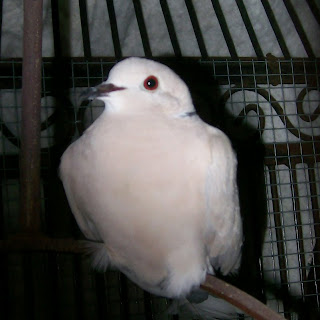 Genghis Khan aka GK on the top of the bird swing where only he and his girlfriend at the moment is allowed to sit. He is a well established bully and a tyrant be-decked as a feathery symbol of peace.