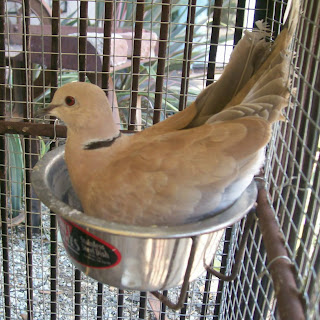 Oops they did it again.
Last night I went to feed the doves. The dish that they are generally fed in is the dish you see above. Yes, the one with the dove inside of it. When I went to move the dove to fill the dish here is what I found. Two eggs. 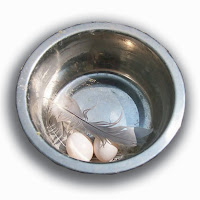 Notice the feather in the dish. This is what a dove considers nest building. For a dove a feather is actually quite elaborate.

Now, two eggs by themselves generally doesn't cause me any alarm except I knew what was underneath the other mom dove. 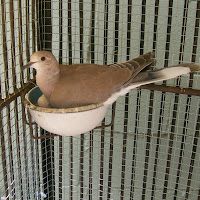 Here is the other mom dove on the left. Despite the humble look on her dove face, she is actually quite prolific, the Octomom of doves so to speak but, without her own reality show. And that is the issue. Underneath her feathery breast is four eggs. Four. That makes an unnerving total of six dove eggs.

The good news is that despite her regular laying of a clutch of two eggs, (doves always lay two eggs) none of hatched since the Christmas population explosion. One can only hope these four also do not hatch.

Two of the eggs have been in there for a while so I think they may be getting dried out. It typically takes about 14 days for a dove egg to hatch. I've read all sorts of information on how to tell if the egg is fertile or not, but the doves seem to be able to figure out although it takes time. When they are dried out and brittle, the eggs get dents and when they get dents, they are tossed out unceremoniously onto the bottom of the cage and pecked by the other doves until they become something not unlike a dove egg omelet except you probably wouldn't want to eat it even with some salt and sour cream. 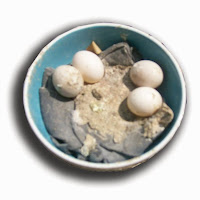 OctoDove is prolific but, not a good housekeeper. Look at her nursery.