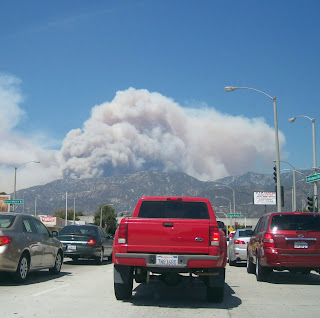 These were taken the second day of the fire when it was beginning to gain momentum and reach epic proportions. I took them as I drove home from the gym (and except for this picture while we were at a light, I did pull to the side in case you are wondering.) It's hard to believe it started from a scrub fire.

You could definitely smell the smoke yesterday but it wasn't overbearing.

Later that afternoone, Fox and I drove up the 210 freeway and pulled off into some of the communities closer to the fire and there were ashes falling, like snow. I know it's horrible to watch, but there is something about fire and the ocean that is so mesmerizing and fascinating. What a picture doesn't show is how dynamic the fire is, nor how it seems to have such a frightening, powerful life force of it's own. A lot of people were out watching. Some with lawn chairs and beers. It was very surreal. 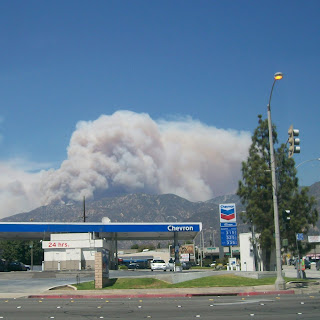 The smoke looks so ominous and evil from this angle as it rolls over the mountain top. It doesn't seem real - more like something you might see in a summer block buster apocalyptic movie. 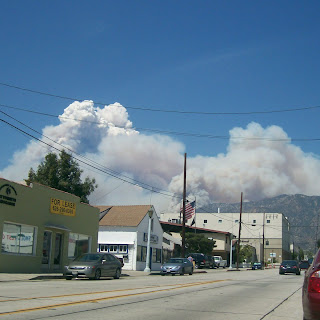 The cloud you see on the left is called a pyrocumulus cloud, that is, it is actually a cumlus (fluffy) cloud that is formed by the fire. Isn't that weird? I just heard it on the radio.
Posted by Lynn Chang at 1:09 AM