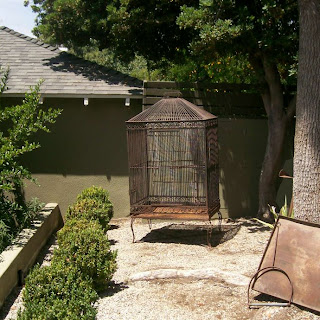 The new cage in the backyard. Notice tray and swing in the foreground it's not really important but you may as well notice it.

A few years ago my husband Fox and I went to an antique shop on the way back from Santa Barbara. In the shop they had a cage full of ring necked doves which had just had babies. The owner asked us if we wanted a pair. At the same time I said yes and my husband said no. Needless to say, we went home with the two doves, Tristan and Isolde.

I love birds but I have bad allergies so my idea at the time was to have an outdoor cage with the doves. I purchased a sturdy, heavy gauge bird cage for the doves. This worked for a few weeks.

Then one night there was a lot of commotion and when we ran downstairs at 3am, Isolde was gone. A raccoon or a gray fox face was probably the last two faces she saw.

The last two faces Isolde probably saw. The fox that visits us has the same nice tail as the one in picture. When I saw his tail in person for the first time, I finally understood why people want to make him into a coat.

We fortified the cage the night after Isolde was killed but a few weeks later Tristan was missing a leg. We then started taking Tristan inside at night and outside each morning. This has been an amazing amount of work because the cage is large and awkward. Plus when they are inside at night they leave behind a surprising amount of dove feathers, dove feather dust and scattered bird seed detritus. And, the amount they leave behind is not linear to the amount of doves, it is exponential. I am thankful though that unlike my zebra finches, doves seem to be unable to projectile poop. Finches on the other hand, can poop at least a foot away from their cage sometimes a longer distance if they have the right angle.

Moving forward a few years. Tristan passed away however he was able to father more doves. Doves interestingly always lay two eggs! One Christmas we woke up to four doves. Then, two weeks later we alarmingly had six doves. They still lay eggs, a pair at a time which makes me nervous but thankfully none of hatched since then as I don't have the heart to poke holes in them or remove them.

After the dove population explosion, I have been desperately trying to give away the doves. It is really impeding my ability to breathe, but no one wants them. Before I get to asking, the answer I get from anyone is no, even when I bribe their kids behind their backs. Frankly, I am not sure why pet stores can even sell doves because I have never met a person that would take them even with a nice cage and a year's worth of food. The only explanation I have is that while doves are very nice, gentle, can learn to sit on your finger they're not very smart. Sometimes I take the cage out and they are facing the wall and when I come back at night they're still facing the wall.

William the cat. He's cute, but don't let that furry face fool you, he is a savage. 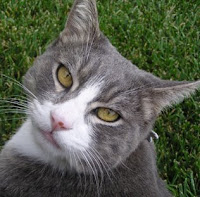 Recently, William my cat (on the left) ate one of the doves. This changed the delicate social balance of the doves. Once the sixth one was killed, the other four doves turned on fifth dove, now a widower who we named Sir Hartley. To protect Sir Hartley, the other doves were pecking off all his feathers, we had to get him his own cage. So now we have two cages to carry back and forth each night.

Poor Sir Hartley coos all day because he has unrequited love for one of the doves in the other cage that spurned him. The reason I know it's a he is he is because male doves "coo coo coo" and female doves make the sound "ah ha ha ha, ah ha ha ha". 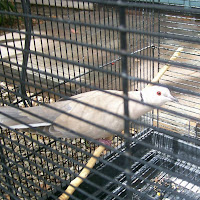 When you look at Sir Hartley you can see there is nothing wrong with him. I think he's just too needy and the other doves sense that and therefore avoid him, but you can't help but feel for him. It's not like he has a dove psychiatrist to help him work out his dove issues.

The birds that have ostracized him are in the picture below. Notice how they are not losing any time or sleep worrying about how Sir Hartley feels. We all should learn that lesson from them. 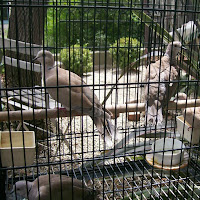 Fearful of another dove explosion, I have been scouring Craig's List for a big, really robust cage and found one this weekend. You can see it at top. It's listing to the side at a jaunty angle but we're going to level it.

According to Patricia who sold us the cage, a monkey was the last inhabitant of the cage. His story is really sad. He was taken illegally from Costa Rica and at customs, he was so still and quiet, the customs officer didn't see him. He lived happily in the cage for many years but when his owners got old, they sold their house and moved into an apartment. Downsizing. It looms in front of the best of us. Next it's Botox and plastic surgery, but I digress. Fearing the monkey needed more space, they gave the monkey to a relative with more room, but the monkey was sad he died of a broken heart. I am hoping that because I am going to put Sir Hartley in with his unrequited love that it will break that cycle.

Before the doves can move in though, I have to wild animal kingdom proof the cage. We bought some wire mesh (they call it hardware cloth) from Home Depot and I have been lining the inside of the cage. The wire mesh has very small openings - 3/8". Wire-meshing the inside of the cage is not good for your manicure if you have one which I don't. And, if I had one I wouldn't have it anymore.

My theory is that the old cage (the one partly shown with the four doves) is only a 16" deep (full measurements: 16" deep x 24" wide x 31" tall) so the raccoon can ostensibly reach his hand fairly far into the cage and when he scares the doves and makes them fly all over the place, he can easily run to the other sides or get on top and grab them or a part of them. With the bigger cage he has a greater distance to run and the doves have more room to avoid him (the cage is 2 feet deep by 3 ft wide by 6 ft tall). At any rate, that's my theory at the moment.

When I started wire-meshing the cage, the concept was to do just the 3 sides, leaving the front and top open. I've done the left side and back, but have to wait until a ladder, which I think is a parrot ladder, even though a monkey used it to do the third side. I am also going to add a multiple family dove nesting condo with a roof so it will protect the doves from the elements or a paw from reaching in. Now I am thinking maybe I need to do all 4 sides and the top so I can be sure no one ends up being dinner at night. 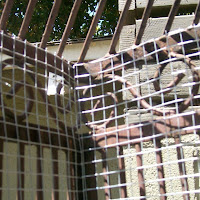 Hopefully the doves will have a new home by this weekend. I will be really happy if we don't have to cart the doves inside and out anymore. Really, really happy.